What is Hodgkin's disease?

Hodgkin's disease or Hodgkin lymphoma is a type of lymphoma, a cancer that originates in white blood cells or lymphocytes (defence cells of the immune system). It is a cancer of the lymphatic system, which is a network of organs, lymph nodes, ducts and lymphatic vessels that produce lymph and transport it from the tissues to the bloodstream, which is essential for the immune system. 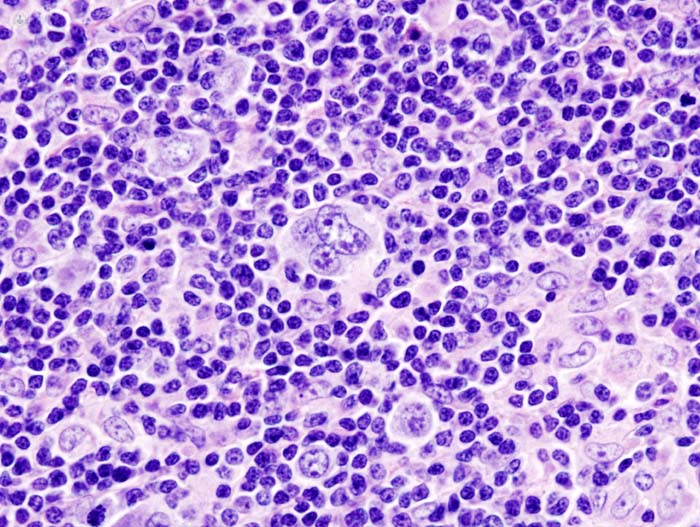 In Hodgkin lymphoma uncontrolled atypical lymphoid cells, called Reed-Sternberg, cause enlargement of the lymph nodes in a particular area, progressively movinf to other nearby areas, such as the spleen or bone marrow. Although Hodgkin’s disease can originate almost anywhere, it usually appears in the lymph nodes in the upper part of the body: chest, neck and armpits.

Hodgkin lymphoma is rare, accounting for less than 1% of all new cancer cases in the UK. However, incidence rates have increased over the last decade, and there are around 2,100 new cases every year. It affects men more than women

According to the World Health Organization (WHO), Hodgkin lymphoma can be divided into two main types:

What are the symptoms?

Other symptoms of Hodgkin lymphoma include:

Certain symptoms may appear depending on the lymph nodes affected.

Causes of Hodgkin's disease or why it occurs

The causes of Hodgkin's disease are currently unknown. However, it is considered that an infection related to the Epstein-Barr virus, such as glandular fever, contributes to its appearance in certain cases. Likewise, people with HIV are at greater risk than the general population as HIV weakens the immune system.

Can it be prevented?

What is the treatment?

The treatment of Hodgkin's disease varies according to the extent of the lymphoma, but it is most commonly based on chemotherapy, or chemotherapy followed by radiotherapy. In very few cases, chemotherapy is combined with steroid medication.

The overall prognosis for Hodgkin lymphoma is generally good providing the right treatment is given, and if the condition is detected early enough. Most of those with Hodgkin lymphoma are cured.

Any cookies that may not be particularly necessary for the website to function and is used specifically to collect user personal data via analytics, ads, other embedded contents are termed as non-necessary cookies. It is mandatory to procure user consent prior to running these cookies on your website.